A Complete Guide to Springtails (aka snow fleas) 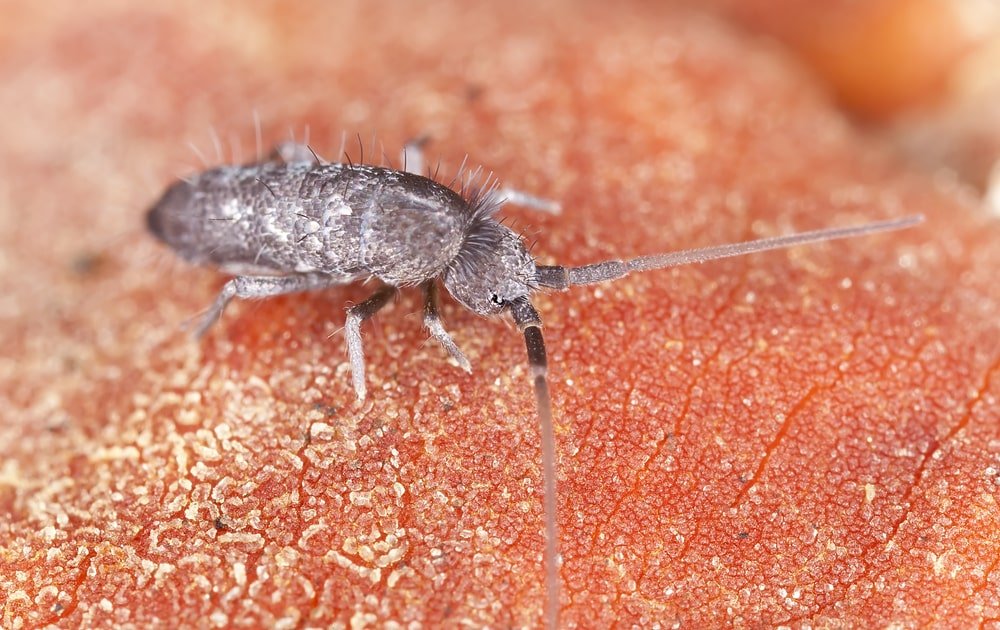 No one likes bugs. That’s pretty much a universal opinion, with the exception of a very select few who enjoy looking at or collecting bugs. But for the rest of us, seeing a bug can cause panic, the response to which can range anywhere from calmly stating the obvious (aka. the ‘oh look a bug’ response) or panicked screaming and jumping onto the nearest object off the ground.

Whatever category you fall into when you see a bug, you still want it to call the pest control company and get rid of it, because many bugs carry diseases or can harm you and your family. And speaking of family, a common scare is the flea. Many of our furry-footed animal owners suffer from this fear. Because of that, another insect also gets a bad rap, simply for looking like a flea, and that’s the springtail.

Springtails look extremely similar to fleas, and are often mistaken for them. They share the same coloring, are the same size, and get around in the same way (jumping, because they lack wings). However, springtails are harmless, to almost everything. They can’t hurt your furniture, bite you or your pet, or eat your food. In fact, really the only thing they harm can be very young plants that have just germinated, but even then, that’s very rare.

Why Do People Confuse Fleas and Springtails?

Indeed they do. As we said before, springtails share the same coloring of the flea, often appearing dark brown or black, and are about one-sixteenth of an inch, which is the same size as a flea. Both have antenna, and the uncanny ability to jump to almost unreasonable and unrealistic heights. However, there’s a clear difference between the two. The springtail has an appendage called the furcula that extends from the end of their abdomen and curls back under their body, and this is what they use to jump and propel themselves forward. Another characteristic (which can be a little more difficult to prove) is the hardness of the shell. Fleas have an extremely hard shell, and can be very difficult to crush between your fingers. However, springtails do not, and can be crushed with relative ease.

They aren’t fleas? How do they survive the winter? Are they dangerous?

Snow fleas are actually a specific species of the springtail, but no, they are not fleas. The species of springtail that they call snow fleas possesses an anti-freeze protein that allows them to lower their body temperature to survive.

This species earned it’s name from the way it would gather on the snow and form a sort of ‘blanket’ in areas of high moisture on sunny days, which is what attracts springtails in the first place. It’s also much easier to locate an infestation in the snow because of their habit of bunching up together.

And luckily, no, springtails aren’t dangerous or hazardous to anyone or, for the most part, anything. Unless you’re a farmer trying to germinate seeds, springtails pose no threat to you, but people often become scared when seeing springtails in large numbers (which, once you have an infestation, makes a lot of sense). However, you do not have to worry about the hoard hurting your house – they’re benign insects.

I have a springtail infestation! How do I get rid of them?

There are quite a few ways to get rid of springtails, most of them relatively easy. However, the easiest course is always prevention, so we’ll start with that.

Springtails are obsessed with moisture, so eliminating places of moisture in the home or eliminating areas of standing water is always a good start. Fixing leaky faucets and pipes is also a must, as well as resealing any basements or attics you may have, and double checking your water heater and ac units are working properly. Eliminating holes they can come in through (such as repairing cracked caulking or replacing siding) is also a huge help.

Eliminating breeding areas outside is also a must. Springtails live in the dirt, and thrive in mulch or mounds of organic matter and soil. As such, remove excessive vegetation, mulch, and leaves from your yard, as well as anything that’s gotten wet and is just sitting in your yard (such as wet leaves, wet underbrush and sticks, and wet cardboard from your recycling bin). Low, moist areas around your house and all crawl spaces should be dried out, either with natural light or a fan. Another way to eliminate moisture is to make sure you aren’t overwatering the plants you have set in your landscaping, since overwatering soil and not allowing it to dry a little between every watering can create a good breeding environment for springtails. Keeping birdbaths can also attract springtails.

Pools are double trouble for people who have a springtail infestation, mostly because thousands of springtails will make their way in, drown, and form a coat on top of the water, which is both revolting and slightly terrifying. However, unless you have an impenetrable pool cover (and I can bet you don’t), you’ll have to deal with springtails in your pool if you have an infestation, so here is our advice. If you have a pool that you don’t use for months at a time, drain it to eliminate standing water, especially if you have a hot tub/pool/fountain combo. Turn off the fountain and drain the water out of the hot tub. If you’re unable to drain your pool, equip it with a high-powered filter or skim the top regularly to remove dead springtails. As disgusting as the bodies of the insects might look, they don’t carry dangerous diseases and are safe to remove however you see fit.

Once you have a springtail infestation, the only other thing you can do after eliminating sources of moisture and food for them is to regularly sweep and vacuum them up until there aren’t any left. Many people are curious if insecticides will work on this peculiar bug, and the answer is a little, but not enough to be worth repeatedly spraying your house repeatedly. It’s better to just crush them as you see them and vacuum or sweep them up as soon as possible, depositing the insects or their bodies in a sealed trash bag that you take out promptly. Of course, this is if they are in your house. If the springtails are converging on your porch or patio, it’s likely that you have overwatered the plants around said porch or patio, and you need to cut back the moisture, as well as any overgrown plants. Be especially careful with mulch in that area too, and sweep regularly.

And of course, if none of this works for you, please give us a call so we can create a custom plan suited to your needs. TermiGuard is also willing to help with all of your insect-related needs!