A Guide to the Spotted Lanternfly 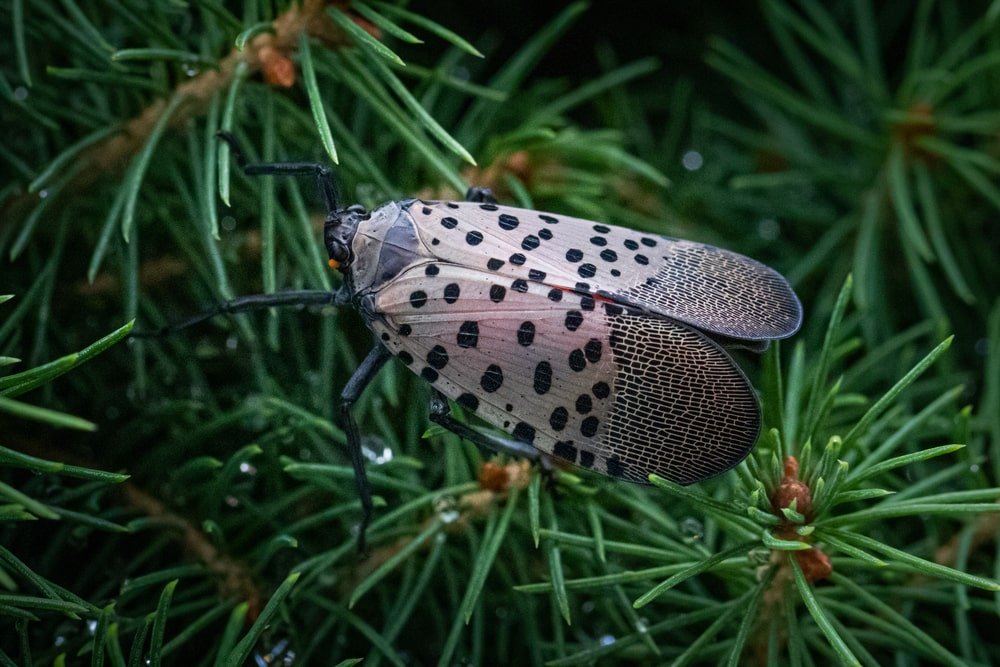 However, the lack of attention backfired as their population is rapidly increasing in North America, and your backyard could be its next victim. This blog will detail everything you need to know about this backyard invader and how to stop it before it spreads out of our control.

What is a Spotted Lanternfly?

Are They Invasive? Where Are They From?

The spotted lanternfly is native to China, but has spread out as far as Japan and Korea, although Korea considers them an invasive species. While harmless in their native countries, they wreak havoc in America. Without any natural predators, the spotted lanternfly has grown rapidly. However, parasitic wasps, spiders, and certain species of birds have begun to target them, but despite that, their numbers are fastly growing.

What damage can they do?

A spotted lanternfly threatens plants, not people, however when they’re a threat to over 70+ species of plants the damage can add up. They cause havoc through feeding, as they use a piercing-sucking mouth part to tap into the sap of trees and plants. When it feeds, it excretes honeydew on and around the site which can cause black sooty mold. This isn’t harmful to humans but can severely damage the plant, which can be a problem for nurseries and farmers. In fact, the most damage has been reported from nurseries, vineyards, backyard gardens and the lumber industry.

Are They Dangerous to People?

In short, no. The spotted lanternfly is neither parasitic nor toxic. It has a tiny mouth it uses to suck up zap but can’t penetrate skin like a mosquito. It doesn’t sting, and doesn’t have any venom. Although scientists aren’t sure if they’re okay to eat or not, they can’t find anything suggesting it’s poisonous. It is suggested however to keep pets and children away from the dead insects to ensure their safety. If your pet or child does swallow one and are showing unusual signs and symptoms, be sure to take them to your local hospital or veterinarian immediately.

Where Are They Spreading and How?

The spotted lanternfly, while first found in Berks County, PA in 2014 they have spread over 12 states north of the Mason-Dixon line. The reason they’re spreading so fast is not that they can travel far but because of their eggs. Spotted lanternfly eggs have a waxy coating that hardens into a mud-like texture so it’s easy to miss if it’s laid on a car for example. This is actually why they’ve spread so far as people unintentionally drive them around. Their eggs can travel across the country, and even now a few dead spotted lantern flies have been reported as far as Wyoming.

How to Identify Them

Spotted lanternflies despite all their problems are fairly easy to find. During the egg stage, the freshly laid eggs are bright white. If you catch them before they change colors, you can easily spot them on a dark tree and car. If found, you can scrape them off into some rubbing alcohol and kill them off. You can crush them or scrape them on the ground as there is a chance they could survive.

From there they go through four stages called Instar. During their first stage, the spotted lanternfly nymph is black with bright white spots. Given these spots they’re easy to spot in a garden or against a building. Thankfully, this coloration continues through the other instars with the exception of the final stage. In the fourth instar red is added to the black and the white spots, making them even easier to spot.

The spotted lanternfly in their adult form is the easiest to spot. As the name suggests they have quite a bit of spots. Their upper wings are dusty brown with dark sports, while their bottom wings sport a bright red inner stripe contrasted with a dark outer stripe. Their abdomens also differ from moths as they’re quite bulbous and round.

Why Are They on My Building, Lamp Posts, Everywhere?

Overpopulation and reproduction or the main factors of this. As I stated, they have no natural predators and prefer non-moving flat objects to lay their eggs, thus they congregate on buildings, lamp posts, and on most suburban everyday surfaces. There are far less natural predators in these environments so they continue to boom in population size.

Should I Report Them? Yes you should!

The spotted lanternfly has presented a huge problem to agricultural and lumber industries, as well as your own backyard. The US Department of Agriculture (USDA) has a list of reporting information for each state effect, and if you’re outside an affected area, contact your state’s agricultural department for advice on what to do exactly. It can also help if you kill these insects on site, as the less there is, the better. Spreading the word to your family and neighbors can help as well as the more awareness there is, the quicker these backyard pests can be stopped.

There are also other things you can do specifically, but there is one big thing you can do if you live in the state of New Jersey. New Jersey is the home to Termiguard, a renowned pest service. As a pest service, Termiguard not only specializes in removing common household pests, but also has moved their sites to the spotted lanternfly. Termiguard is one of a few pest services that has taken the battle against spotted lanternflies head on, and they’re quite effective at it. If your home is overrun by these pests, report them to the USDA then call Termiguard to take care of them once and for all before they spread any further.