The Truth about Daddy Longlegs 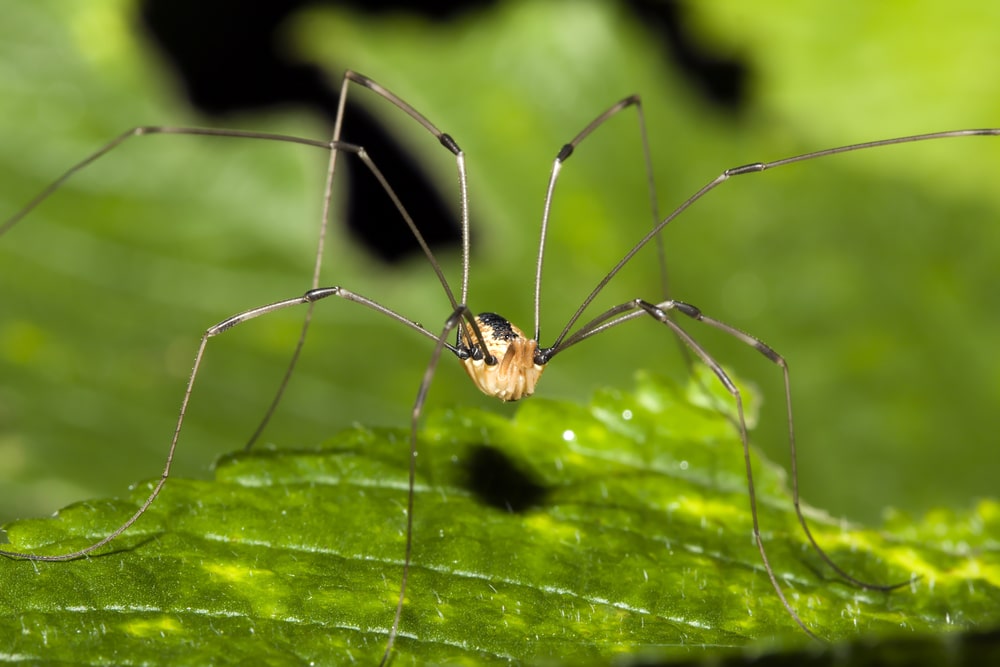 When people are having a conversation about spiders, and especially daddy longlegs, someone usually chimes in and makes a remark about how daddy longlegs have the most powerful venom of any spider but they are unable to use their venom because their fangs are too small. If you are that someone, do not fear because many people, insect lovers, and even teachers, fall prey to this overused myth as well.

One key difference between harvestmen and spiders is that harvestmen have only one bodily region, their abdomen. Spiders have a distinctly large abdomen that is separate from their far smaller head. Another difference is that harvestmen only have two eyes while most spiders have eight. Also, harvestmen cannot produce silk or venom which makes sense because they are scavengers, not predators. In sum, harvestmen are not spiders and thus do not pose a threat to humans. We will continue debunking the daddy longlegs myth as well as give you methods to prevent them from invading your property.

There is another critter that is commonly recognized as a daddy longlegs and it is in fact a spider. Originally, these spiders were given the name “cellar spiders” due to them being seen in basements and cellars more than anywhere else. Over time, however, arachnologists gave them the co-title of “daddy longlegs spiders” due to people believing them to be harvestmen. Although the cellar spider is present in every continent except Antarctica, there is no reason to fear these spiders as there have yet to be any evidential findings that they can cause harm to humans. While they produce venom and can pierce through the skin, they are not drawn to humans and nothing evidence suggests that they ever will be.

Along with the misidentification of these two species, there is also a great deal of confusion of the terms venomous and poisonous, respectively. A venomous creature has glands that are used solely for the production of venom which can be administered to other organisms through fangs, a sting, or other forms of injection. Similarly, though not the same, a poisonous animal or plant produces a compound from within its glands that can poison another organism when the other organism comes in contact with the compound. Another common misconception of venomous and poisonous organisms is that their venom or poison is ubiquitous in its ability to harm any and all other organisms. It is true that venomous organisms have the ability to inflict pain or even kill their prey, but it is false to claim that their venom has universality. For example, a honey badger is immune to rattlesnake venom, while humans are susceptible to the effects of rattlesnake venom. Likewise, an insect can be killed by another, venomous insect, but humans are immune to the insect’s venom.

Although cellar spiders do not pose a threat to humans, they can be a nuisance. The largest concern when having cellar spiders in your home are the webs these spiders construct. The vast majority of spiders clean a single web repeatedly, but cellar spiders layer another new web over their dirty web, which continuously creates a larger cobweb that can be an eyesore. To best protect your home from cellar spiders, it is best to use a softer yellow light, rather than an LED or fluorescent light as cellar spiders are more attracted to the latter. Also, if you have any wood or leather belongings in your basement, it is smart to put these items into plastic bins as it will not allow the cellar spiders to find a comfortable area to construct their webs and nest. If you are terrified of the mere thought of having them in your home, a dehumidifier in your basement and the other humid parts of your house can discourage them from coming into your home. This is especially true if you live close to a body of water that produces moist humid air that is the desired living environment for cellar spiders.

Preventional measures for harvestmen are similar to those for cellar spiders with a few important distinctions. To keep harvestmen away, it is crucial to clean up wood, trash, and other forms of debris that may be inside or in close proximity to your home. If you are an aracnaphobe, which many of us are, a more advanced approach is to seal any windows, doors, screens, and any other crevices in and around your property. If your home is in need of repair and you are noticing that there are a greater amount of daddy longlegs than usual in your home, that means that other pests are getting in as well. Because of this, daddy longlegs are drawn to the food supply that the other insects provide which puts an even greater emphasis on making sure your home is properly sealed. Similar to cellar spiders, harvestmen are attracted to light and especially fluorescent and LED lights, so try your best to keep your lights off when you are not using them. Turning off your lights is even more crucial if you have a porched area because harvestmen love the shelter and a practically endless supply of food that a porch can provide. If you want to take your daddy longlegs defense to the next level, you can use sticky traps on your porch and anywhere else in your home to capture the harvestmen on your property.

If daddy longlegs, both harvestmen and cellar spiders, have already come into your home, the easiest and most satisfying method for any arachnophobe to get rid of daddy longlegs is to vacuum them up. They are slow and unintuitive which allows for a quick and easy clean. Also, crunching them with a paper towel can leave stray legs of the creature behind, which no one wants to see. Additionally, you can use natural pesticides and spray, boric acid, and other chemical based substances to eradicate the daddy longlegs in your home. If you are going to purchase sprays to solve your problem, remember to be careful, use as directed, and to only use sprays permitted for indoor use. If you are not confident in your ability to eradicate these critters, you can always call an expert to come and do the job.

By and large, the best way to get rid of daddy longlegs is to call the pest control experts! At TermiGuard, we offer plans that can keep your home clear.