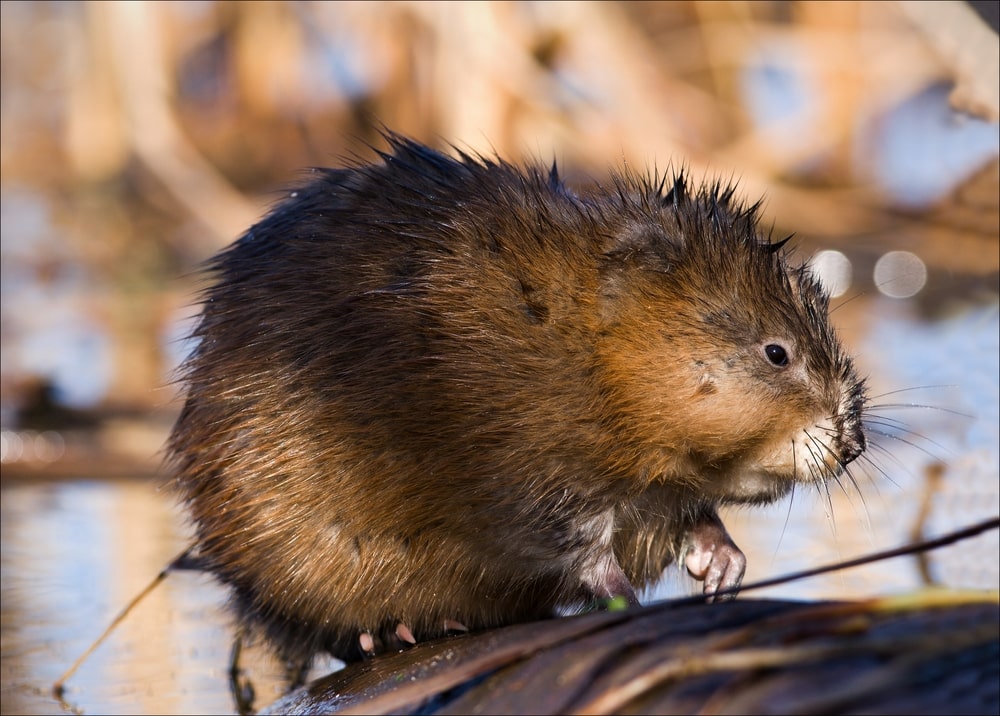 Surely you’re familiar with rats, mice, squirrels, and beavers, but have you heard of their rodent cousin, the muskrat? Muskrats are large, amphibious rodents known for their unusual penchant for living near bodies of water. The name “muskrat” derives from “musky”, which refers to the strong, unpleasant odor the animals produce while mating.

Unlike most of their fellow rodent species, who prefer to hunker down in burrows in drier climates like grasslands or prairies, muskrats opt for the wettest of the wet. Similar to beavers, muskrats are semi-aquatic, meaning they thrive in areas by ponds, dams, lakes, streams, drainage ditches, in canals, or in marshes or wetlands. They are native to North America and are spread all over the continent– mostly in the U.S., Canada, and a small part of Northern Mexico. Today, there are also ex-pat muskrats in Ukraine, Russia (brrrrrr… they must like the cold), and parts of northeast China, western Mongolia, and Honshu Island in Japan.

While close relatives of mice and rats, muskrats’ appearance more closely resemble the beaver. They are distinguished by their hairless, slender tails and thick, bushy coat of fur (varying in color from blackish to silvery-brown). Muskrats have tiny beaded eyes, small, furry ears, and big, semi-webbed feet that allow them to swim efficiently. They are even able to swim backwards.

What are Muskrats’ Role in the Environment?

In their natural environments, muskrats play an important, symbiotic role. They help control plant and animal populations via their unpicky, omnivorous diet. They eat a lot of vegetation, including algae and the roots, stems, leaves, and the fruits of water plants. They get their food from what is in or around the water. While largely vegetarians, muskrats also eat some small fish, clams, snails, and even turtles.

They are the prey of many animals, including minks, coyotes, and raccoons. Because they are dinner for so many other animals, muskrats have to stay vigilant. Out of an abundance of caution, they usually scurry off with their food and bring to sheltered areas to eat it, stuffing it into a hole in the ice or on a “bed” of vegetation on the water. They use their claws to build habitats in the marshes and live in territorial groups with other muskrats. They are not picky eaters, and have even been known to occasionally eat their beloved family members.

Unfortunately, for us homosapiens, it is not totally uncommon for muskrats to set up shop in their human neighbors’ muddy backyards, decorative ponds, or even in swimming pools (they are excellent swimmers and can hold their breath underwater for up to 17 minutes!).

In the U.S., muskrats are found in wetland or marsh areas, besides Florida (the alligators have probably already taken care of them there). Many muskrats call New England or the Midwest home. As mentioned, muskrats love living by ponds and lakes. If you have a pond or lake on your property, it may attract local muskrats looking for an aquatic food source.

What Damage Can They Do?

Muskrats are culpable of soil erosion and water seepage. In banks, muskrats dig tunnels starting underwater and continuing above water level. This causes damage to the banks and can weaken soil. If you have a pond on your property, be aware of muskrats. Their annoying burrowing habits may damage the banks and create tunnels through which water seeps out, and therefore cause flooding. This can be a huge pain for homeowners trying to maintain a clean and neat pond. Since they are such vegetable lovers, know that muskrats may go after vegetable gardens– and they can cause a lot of damage. Their favorite vegetables grown by humans include: soybeans, corn, wheat, oats, sugarcane, rice, and other grains. They may also eat seeds and carrots, if on the menu.

Unfortunately, muskrats can also be dangerous as they can carry diseases. This is a threat to both humans and pets. They can carry tularemia and the kidney-related disease Leptospirosis. Infection often spreads through contaminated water. Muskrats may also carry rabies, which poses a threat to dogs if they bite them, which can then be spread to their human owners. Pets and small children, who are vulnerable to being bit, should be kept away from muskrats if they are found in the area.

How Do I Know If I Have Muskrats?

First, you can identify muskrats by seeing one. They are larger than your standard rat or mouse and are more similar to beavers in appearance. Their chunky, furry bodies and long, skinny tails should give them away. As expected, they are likely to be found in our near bodies of water.

Their tracks may reveal their presence. They are identified by their small, visible claws, four anterior toes and five posterior toes. You may also sight their droppings, left on dry surfaces like logs or tree stumps.

Another common giveaway of a muskrat infestation is their burrows and lodges. Things to look out for include: holes which might be burrow entrances (in the backs of dams), and piles of mud and vegetation called “lodges”. The final way to know you have muskrats is the damage done to structures such as ponds or dams caused by their burrowing. Flooding may occur from holes made in dams or collapsed banks due to a muskrat’s tunnel-building adventures.

How Can I Prevent a Muskrat Invasion?

The best way to prevent a muskrat invasion is to deter them before they even begin to cause damage. You can use homemade repellent around ponds, the perimeter of garden beds, around an unfenced property, and trash cans. Repellants include cayenne pepper mixed with water, garlic pepper, coyote urine, and fox urine. There are also store-bought repellents available.

How do I contain a muskrat infestation?

If it’s too late to prevent muskrats, you need to contain them. The best way to stop a muskrat invasion is by calling on the professionals who have the expertise and equipment to carry out an effective containment plan. TermiGuard Services in New Jersey is here to deal with any and all pest-control issues, including muskrats and other rodents. TermiGuard offers a wide range of Pest Control Plans for every pest and every home. You can rely on TermiGuard to get rid of the pesky creatures once and for all.