I grew up camping; insect bites were simply part of my childhood. Frog hunting with my Uncle Ed, riding horses at my Aunt Fran’s, and getting so muddy my own mother wouldn’t recognize me in a lineup were all normal occurrences for me and my older sister. So between time spent outdoors, and now working in a company which specializes in pest management, I thought I was pretty well equipped with knowledge about creepy-crawlers and their habits. But I had no idea what chiggers had in store for me.

Have you ever heard of chiggers? I hadn’t.

Rewind back to Labor Day weekend for a minute. I had plans for a BBQ with friends on Monday, so I decided to spend my Sunday being a bum. Armed with a big cup of iced coffee and my latest book obsession, I took residence on my back porch to hunker in for a long afternoon of reading and enjoying the beautiful weather.

Six hours later, I came in the house, cooked dinner and spent some time with family who came over to visit. The rest of the night continued on as normal.

The next morning, I am getting my shower and notice some weird bumps on my legs. Knowing my tendency to get bug bites, I don’t think much about them. I throw on a pair of jeans and head out the door to my friend’s BBQ… That night as I’m changing into pajamas, I realize those little bumps I saw earlier are a lot worse than I originally noticed. Not only is there more than before, but the affected area is bright red with irritation.

Both feet. My left ankle to about four inches up my calf. My right ankle to up my calf to up my hip. A few marks on my stomach on the right side. Both forearms. And a few spots on the back of my left arm by my armpit. ALL WITH RED BUMPS.

I assume it is some allergic reaction of sorts; it is only red in color marks and some places look a little like tiny blisters… maybe I rubbed up against something out back when I was in the yard or my dog did and then came and laid on my legs like she normally does. I go to bed and wake the next morning for work without giving it too much further thought.

The Torture of Chigger Bites

When I tell you that I would not wish chigger bites upon my worst enemy, you need to understand how serious I am!

By Day 2, my bites were beginning to itch. I decided they were in fact not just a reaction to something (OBVIOUS in hindsight!). As I was sitting at work, Mike Allen — one of the company’s owners and founders — is telling the office staff about the chigger bites he and his son got over the weekend from fishing. He described them being clustered together and explained how chiggers normally target areas on the body which clothing is tighter. For example, belted pants, sock and shoes borders, etc.

It was a classic light bulb over my head type of moment. I pulled my pant leg up and immediately demanded he look at my bites. He probably originally thought I was crazy because I offered no explanation of why I wanted him to look at my legs. Haha Ooops!


Mike decided to take advantage of my naïveté – like any good boss would do! Catching on to the fact that I did not have any experience with chiggers, Mike told me that the bumps were a result of the insect burrowing under your skin.

GRAB THE LIGHTER FLUID AND A MATCH! CUT MY LEGS OFF! ICK! HELP!

As I’m sure you can expect, I was revolted by the thought that little bugs were under my skin. Thankfully, because I grew up in a digital world, I immediately went to Google to confirm his diagnosis.

CHIGGERS DO NOT BURROW UNDER YOUR SKIN.

Everyone got that? Reread that if you have to.

It is just an old wives’ tale. Do not let anyone convince you otherwise… or you may panic like I did and prepare yourself for self-performed surgery. HA!

Using the burrowing theory as a springboard, the clear nail polish trick you’ll read about is also false. Some people say to apply nail polish over the bite to “suffocate” the bug, but as we just cleared up, there is no bug to suffocate in the bite.

Chiggers are members of the arachnid family and are incredibly tiny. You will not see them without magnification of some sort. 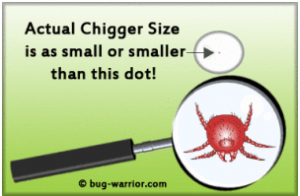 So what CAN you do if you find yourself a victim of chigger bites?

This article isn’t intended to be medical advice. But we do have some ideas for chigger control. Once you see the symptoms of chigger bites and need to treat chigger bites, it’s time for action.

Don’t be discouraged if you don’t see a reduction in bites or redness quickly.

Chigger bites can take anywhere from 1-3 weeks to completely heal. I am two weeks into this ordeal and I am happily reporting that my bites no longer itch as fiercely as before. I wish I’d worn long sleeves! Going 5 minutes without itching used to be an unattainable feat, but now I can go the whole day without going to town on my bites. It is hard not to scratch, but keep in mind that when you reopen the bite, you are risking infection and scarring.

If you find yourself a victim of chiggers on your property, don’t hesitate to call us at TermiGuard Services. We can create a plan to control the chigger infestation on your property.