What Kind of House Spider is This? 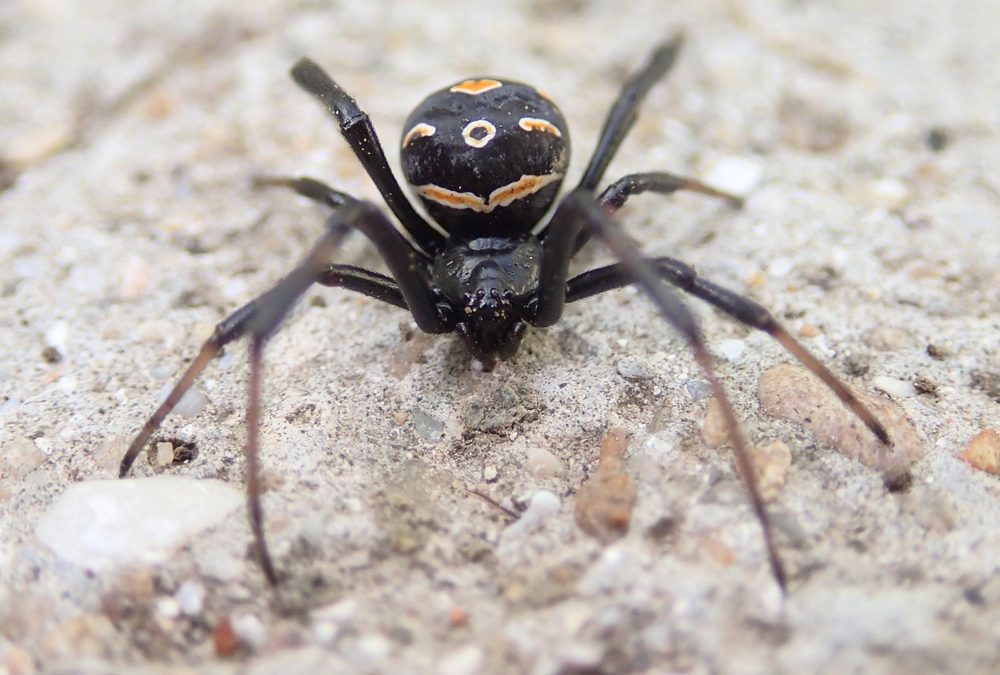 Here at TermiGuard, we have experts that can help you get rid of house spiders! If you suspect any of these spiders are living in your home, the best way to deal with them is to contact us for an initial consultation. If you happen to come across any spider, it is essential to be careful. Here is a list of common house spiders to help you identify which types of spiders are poisonous.

American House spiders are known for being responsible for cobwebs that typically appear in basements and closets. They can be yellowish-brown, tan, or grey with dark brown spots and have long skinny legs. In size, they tend to be small, usually about the size of a nickel. They usually live in closets, high corners, window frames, garages, sheds, barns, basements, and under furniture because they like dark, moist inside spaces. American House spiders eat various pests, including flies, mosquitoes, ants, and wasps.

These spiders have poor vision and tend to avoid confrontation with humans. They are not typically aggressive but can bite humans for self-defense if they are provoked. Although their bites hurt, they are not harmful.

Brown recluse spiders are brown or grey in color, have an oval body, and are about 6-11 mm. However, they are different from other spiders in they have only have six eyes as opposed to eight. These spiders usually make their way into homes by being carried inside via boxes and bags. Although they are nocturnal, they can be found outdoors in debris or wood and indoors in basements, attics, crawl spaces, between walls, in furniture, and even in clothing. It should also be noted that they live long, can go months without eating, and can produce over 150 baby spiders in a year.

Although Brown Recluse Spiders rarely bite humans, it is essential to know that they are venomous. They will bite if they are provoked by getting caught in bedding or clothing. Depending on the amount of venom, the effects of their bites can go unnoticed for hours. Their bites sometimes turn into small white blisters or create a lesion, causing symptoms such as chills, burning sensation at the site, fever, sleeping difficulties, and nausea. The cytotoxin in the venom also can affect the tissue at the bite site. You should seek medical care immediately if you have been bitten.

Jumping spiders are agile and enjoy living in grasslands to prey on small insects. Nonetheless, they can still get inside your home on clothing or plants and like spending time inside of windows, screen doors, along walls, and any area with sunlight. They are about an inch long, and their color can vary between brown, black, tan, grey, beige. To distinguish them from other spiders, aside from their habit of jumping, they also have a fused head and thorax, and the front row of four eyes is larger than the posterior four.

As unaggressive spiders, they prefer to avoid confrontation with humans and not considered especially dangerous. Although they do have venom, it is no different to a bee sting. For most people, the bites are not medically threatening unless they are allergic and experience a reaction.

Black Widows can easily be identified because they have a red mark on their abdomen in the shape of an hourglass. The rest of their body is usually shiny black, and they are about the one and a half inches. They are antisocial and tend to hide in dry and dark, undisturbed areas, such as woodpiles, and also prefer to build webs close to the ground, on plants, rocks, debris, outdoor furniture, and railings. In a home, they can be found in garages, basements, barns, and sheds.

These spiders are extremely dangerous with toxic venom. They can get aggressive when they or their webs are disturbed, leading them to bite people. Symptoms of the bite include fever, shock, restlessness, muscle spasms, chills, increased blood pressure, severe stomach or back pain, nausea, and vomiting. Since they are so toxic, if you suspect Black Widow spiders, call us immediately! If bitten by one, seek medical help as soon as possible.

These spiders are typically larger than other household spiders. They can be brown, black, tan, or grey and have hairy elongated bodies. In the outdoors, they can be found in woods, gardens, beaches, riverbanks, and even fields. Wolf Spiders are quick and enter houses through windows, foundation cracks, plants, or through attached garages. They tend to enter homes in the fall because they are seeking warmth.

Unless you are allergic to spider bites, these spiders are harmless. Some people even have them as pets! When they do rarely bite, it can cause slight pain, redness, or itchiness. However, they do not attack unless they feel threatened.

Regardless of whether they are dangerous, nobody likes having spiders crawling around their home. Call TermiGuard today for an initial consultation on any house spiders you may have!